"With a ventilation hole" for the right upper lobe.

The LSD from Stening®, with a lateral hole, is useful for diseases in the main right bronchus or the intermediate one when you want to preserve the ventilation of the upper lobe through the lateral hole of the stent. The hole must be orientated to this lobar. 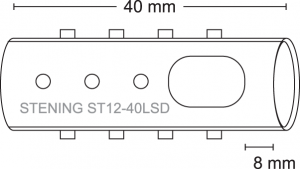 The removal and introduction technique described in the Stening Tracheal Stent can be followed. But the tracheoscope must be replaced by a bronchoscope with a diameter of 10 or 11 mm.

The use of this stent is exclusive for diseases that take place in the main right bronchus or the intermediate one that have an unscathed upper lobar. So, pay particular attention on orientating the stent inside the ejector and this one inside the bronchoscope. In order to leave the stent lateral hole confronted with the right upper lobular entrance when the stent is freed inside the bronchus. Once implanted, the air will enter to the upper lobe through the lateral hole of the LSD from Stening®.

Very similar to everything considered for bronchial stents: keep the moisture of secretions whenever they appear, perform frequent nebulisations with a warm isotonic saline solution. Do a periodic control specified by the doctor. Treat cavities and take care of your oral hygiene