It is a tracheal stent of easy implant and removal. It is especially suitable for the benign stenosis treatment.

With a 14, 15 and 16 mm diameter on its edges and a 12, 13 and 14 mm diameter respectively on its central portion, constitutes a profile that increase the difficulty of its spontaneous displacement after being introduced.

The stents for tracheal stenosis (SET) have a 5 mm longer version: “L” (see table of dimensions).

These variants is how Stening® responds to the needs on treatment for special clinical situations. 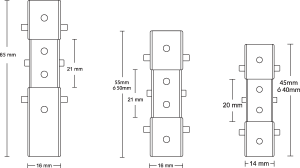 The introduction and removal techniques described for Stening® Tracheal Stent can be followed.